A digital image of a kakapo brain.

Quest to sniff out kakapo fragrance spans centuries and continents 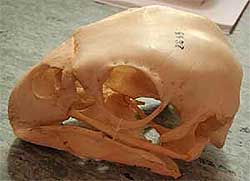 Kakapo skull dating back to the 1880s stored at the
Vienna Museum of Natural History, which was scanned
for a study of the brain. 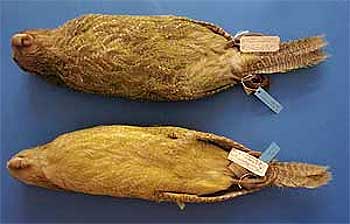 Kakapo specimens held at the museum collected by
Austrian naturalist and collector Andreas Reischek in the
late 19th century. Doctoral student Anna Gsell with a kakapo she is studying.

Feathers of the flightless kakapo are being flown around the world as part of a Massey biologist’s quest to understand the role of the critically endangered native parrot’s sense of smell and the power of male feather fragrance on breeding behaviour.

Dr Brunton, who heads the Institute of Natural Resources’ Ecology and Conservation group at Albany, says it is likely that bird body odour plays a significant role in female kakapo mate choice.

“Although we know males smell strongly, the unique characteristics of the scents are not understood,” she says. “Because they are nocturnal, kakapo are thought to have a more sophisticated sense of smell than other diurnal parrots. “

About 60 feathers clipped off live kakapo during transmitter changes and health checks by Department of Conservation staff are being sent for analysis to animal olfactory chemist Professor Tom Goodwin at the Hendrix College in Arkansas. He will analyse the samples using a gas chromatograph mass spectrometer, a machine that can measure the volatile chemicals of kakapo feathers relating to scent. Dr Brunton and Ms Gsell will compare these results to the feathery fragrances of other native parrots such as kaka, kea and kakariki in order to try and identify the unique characteristics of male kakapo feather odour.

Having a better understanding of the unique chemistry of kakapo feather fragrance, which they describe as “sweetish and vegetative” – and how it influences mating behaviour could provide clues as to why female kakapo queue up to mate with certain "popular" males when other males are available.

While “a bit of a long shot”, she says, the research could pave the way to creating a synthetic kakapo “perfume” to encourage more diverse breeding which in turn would help expand the kakapo gene pool and its immune competency – an important issue considering the total kakapo population stands at just 91.

With funding from a Claude McCarthy Fellowship, Professor Brunton this year also recruited University of California scientists at Berkeley to do stable isotope analysis of the chemical compounds of historic feather samples of kakapo in a separate project to find out more about kakapo diet and how this has changed over time. Kakapo, now only found in two protected offshore islands near Stewart Island,  feed on rimu and pink pine fruit when available and supplementary food developed  by Massey’s veterinary department and distributed by the Department of Conservation’s Kakapo Recovery Team.

Dr Brunton obtained feather samples from Vienna’s Museum of Natural History during a recent trip. The museum has an extensive collection of skins and skeletons of New Zealand bird species collected by Austrian taxidermist, naturalist and collector Andreas Reischek between 1877 and 1889.

In yet another aspect of this study, the researchers have organised CT scans of the historic kakapo skulls from the Vienna museum’s collection. These are being digitally analysed to study the kakapo brain. By observing the contours of the kakapo brain they hope to be able to find out more about the brain region associated with smell.

“The more we understand about the many aspects of kakapo behaviour and biology, the better equipped we will be to ensure its survival,” Dr Brunton says.