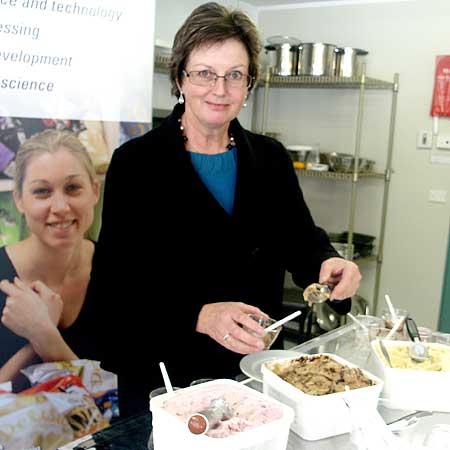 Does ice-cream actually taste better when it is licked from a cone than when eaten from a spoon?

Massey food technology senior lecturer Kay McMath thinks so. Although she is not aware of any specific scientific evidence to prove it, she says “there are some physical and physiological reasons why there are likely to be differences in flavour”.

“Flavour in ice cream is only released when the fat content – which carries the flavour – is warmed in the mouth to at least body temperature,” she says.

“During licking, the tongue is coated with a thin layer of ice-cream which is more quickly warmed and the flavour is detected by the large surface area of the taste buds present on the tongue.”

By comparison, the spoon provides insulation to keep the sample colder when put into the mouth. Once in the mouth the tongue pushes the ice cream to the roof of the mouth to melt before swallowing.
A smaller surface area is therefore involved in warming the ice cream to release the flavours.

Another factor influencing the perception of taste is the quantity of ice cream in each mouthful. The bigger the mouthful, (as with a spoon) the more likely it is that it will be chewed before swallowing.

“When licking, it takes longer to eat the same amount so that the flavour is savoured and more likely to be enjoyed. Remember as a kid trying to make that ice cream last longer than anyone else’s?”

However Mrs McMath acknowledges “it’s a difficult hypothesis to prove as it involves such different procedures. The consumer will psychologically believe there are likely to be differences – whether real or not".

She was asked by manufacturer Tip Top for her opinion to help promote the company's $1-a-scoop promotion on Labour Day.

Mrs McMath, based at the Institute of Food, Nutrition and Human Health in Albany, is well known as chief judge at the New Zealand Ice-Cream awards held every year. Six of her students won the Open Creative category of the awards this year for their range of gelatos.