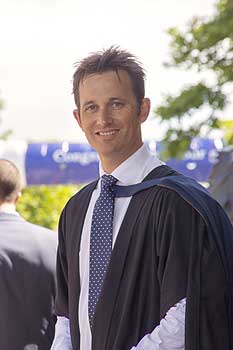 Shane Bond at his graduation ceremony

Cricketer Shane Bond was concerned he wouldn’t be able “to cut the mustard” when he embarked on his MBA at Massey University, so it was a proud moment for the former Black Cap when he crossed the stage at his graduation ceremony this afternoon.

“One of my regrets has always been not finishing the tertiary studies I started earlier in my life, so I am really satisfied to have completed my MBA and I’ve been really looking forward to this graduation ceremony,” he says.

Mr Bond first considered tackling postgraduate study after meeting Massey University Council member Bruce Ullrich at a Christchurch Rotary event. Mr Ulrich convinced him that the flexible structure of Massey’s programme would fit with his lifestyle and other commitments.

“When I started I was worried I wouldn’t cut the mustard, but I found my feet and had great support from Bruce, my classmates and, of course, my awesome wife who had to deal with all my travel as well.”

Mr Bond embarked on his MBA after retiring from professional cricket but had to juggle his responsibilities as Black Caps bowling coach during the final year of his studies.

“I was travelling with the team for six months of the year so that made it a bit difficult to get the interviews for my final research project done,” he says.

“Fortunately Massey offered me some flexibility and, to be fair, I imagine all the others in my cohort who worked fulltime would have had workloads that were just as big.”

Mr Bond says he won’t miss lugging his textbooks and reading materials around with him on cricket tours, but he is looking forward to using some of the new skills he’s learned.

“I wanted a degree that would provide me with broad knowledge and I’m already finding the management and leadership skills useful in my cricket job. I deal with a lot of different types of people and I’m using those tools more and more.

“The MBA has also challenged me to think strategically and look at the big picture, which I find myself subconsciously doing all the time now. It’s really provided me with a different way of thinking.”

Given New Zealand Cricket’s well-documented governance issues, Mr Bond’s MBA research project into cricket governance should prove useful if he stays with the sport in the longer term.

“I can see myself eventually getting involved with cricket at the board level and I now have an appreciation of the different governance structures and models. I guess what I really learned is there is no perfect formula.”

While Mr Bond says he’s definitely happy in his role as Black Caps bowling, the MBA broadens his future career options both within cricket and elsewhere.

“I love cricket but I have three young kids at home and I’ll eventually look for something that involves less travel. The MBA should open up more doors for me away from the game. It’s given me more credibility and confidence in my abilities – and it shows there’s more to me than just a name.”