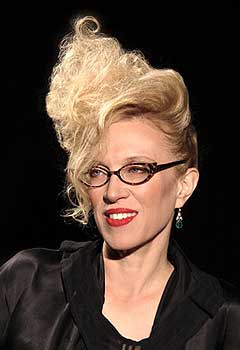 Professor Valerie Steele will speak at the conference.

Is fashion in its death throes? It’s a question 75 of the world’s top fashion thinkers and designers from global centres of fashion will consider when they descend on Wellington in early December. Last year, trend forecaster Lidewij Edelkoort declared that fashion was dead, describing the industry as "a ridiculous and pathetic parody of what it has been”.

The first international End of Fashion conference which will be held on December 8/9 has been convened by Professor Vicki Karaminas from Massey University and Professor Hilary Radner from University of Otago. Massey’s College of Creative Arts will host the conference where attendees will consider the dramatic shifts that have occurred within the fashion system.

Fashion scholars largely agree that, at least within Western society, attitudes towards clothing have changed radically in the twenty-first century.

“Luxury fashion has been democratised. It used to be reported by an elite group of journalists but in recent years, bloggers have emerged as a fashion elite. Fashion shows are now disseminated through live-streaming — people can go to Paris Fashion Week from anywhere in the world. Shanghai, Mumbai and Brazil are now fashion hubs in their own right,“ Professor Karaminas says.

Topics on the agenda will include: the democratisation of haute couture, micro-trends and online identities, challenges for national fashion in an age of globalisation, the role of museums in mapping a new fashion system, fast fashion, sustainability and innovation, fashion and feminism and the impact of celebrity culture on fashion.

Professor Valerie Steele, fashion’s brainiest woman, according to The Washington Post, will speak at the conference and convene a sold out forum at Wellington’s City Gallery where Kate Sylvester, Margi Robertson (Nom*d), Liz Findlay (Zambezi) and Margo Barton (iD Dunedin Fashion Week) will discuss the impact of the rapid changes that have occurred in the fashion industry.

Director and chief curator of the Museum at the Fashion Institute of Technology,  Professor Steele, will talk about the way globalisation and technology have transformed the production and consumption of fashion and discuss whether or not the fashion system is broken or unsustainable in a keynote address at the End of Fashion conference. She will also talk about the rise of the fashion exhibition at Te Papa on Saturday December 10.

A second keynote speaker, Professor Pamela Church Gibson is Reader in Cultural and Historical Studies at the London College of Fashion. She has researched and written widely on the role of fashion and costume in film, fandom and the contemporary star system, and will talk about the way celebrities such as Kim Kardashian have become fashion icons rather than the more traditional Hollywood fashionistas.

Professor Church Gibson will speak at two exhibitions for fashion aficionados. On December 8, she will speak at Expressions Whirinaki in Upper Hutt at Catwalk to Cover  - a behind-the-scenes insight into the creative world of the fashion shows of London, Paris, Milan and New York featuring more than 100 images, alongside clothes from leading New Zealand designers. On December 9, Professor Church Gibson will speak at an exhibition at the City Gallery by foremost New York-based artist Cindy Sherman.

During the conference, an End of Fashion exhibition will be held at the College of Creative Arts. Co-curator and senior lecturer in fashion at Massey, Sue Prescott, says the exhibits respond to the conference theme. “There are exhibitors from Germany, Finland, New York and New Zealand, discussing fashion as we know it and what will be next. The exhibits will visually discuss the fashion cycle and over production, the role of social interaction in dress through Claymation movies and include paper garments from Leila Jacobs in Auckland,” she says.

For more information about the conference visit http://thendofashion.com/