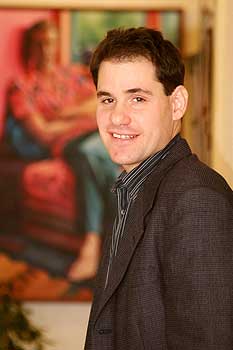 What happens when an award-winning poet from Massey University researches science? Two books, one scholarly and one poetry, published at the same time. Dr Bryan Walpert’s Resistance to Science in Contemporary American Poetry, an academic monograph about “science poems” just published by Routledge, concludes a journey that took place over 10 years.
Dr Walpert’s latest collection of poems, A History of Glass, evolved over the past four years. It also draws its inspiration at times from science. But the 30-plus poems also deal with subjects ranging from art and music to glass blowing and the shot glasses that figure prominently in Thank You, Persia, a poem that won the 2008 James Wright Poetry Award from the Mid-American Review.
Dr Walpert has always had a keen interest in the scientific world, a topic that has come up several times in his poems and stories. Noticing that other poets often refer to  science in their work, he started investigating the ways science was used and the attitudes the poems took to science. Resistance to Science in Contemporary American Poetry argues that despite frequent public calls by poets for a bridge between poetry and science, the poems themselves often resist scientific authority. The book examines contemporary forms of resistance and traces their roots in romanticism, modernism and postmodernism.
“It’s not that they don’t like science,” he says. “Poets are just resisting the idea that science is the only legitimate form of knowledge about the world.”
The book concludes with an argument for a new sort of bridge between science and poetry: It argues that both poetic and scientific knowledge are forms of intervention, an idea he develops by examining experimental poetry in light of cutting-edge science studies scholarship.

A History of Glass has been published by Stephen F. Austin State University Press in Texas as a result of being selected a finalist from about 1000 entries in the press’ national manuscript competition. The link between his poetry and his scholarly interest in science is evident in such poems in the collection as  Static and The Mathematician.

Though some find it a surprising combination, it is not rare for scientists to write poetry and for poets to connect to science. Roald Hoffmann, a Nobel-winning chemist and author of Soliton: Poems, rates Dr Walpert’s work as some of the best he has read in years. “In these thoughtful, soulful poems every reflection is earned. And they are voyages – Walpert has a natural narrative voice that works through lovingly observed overlapping images, gently pulling the reader into a shared, spiritually rewarding journey. One could not ask for more of poetry.”

Dr Walpert is also the author of another book of poems, Etymology (Cinnamon Press), and a book of short stories, Ephraim’s Eyes (Pewter Rose Press), named by writer Mary McCallum on Radio NZ National as one of last year's best books.
His work has been published internationally in such journals as AGNI, Crab Orchard Review, Hayden’s Ferry Review, Poet Lore, and Tar River Poetry, as well domestically in the New Zealand Listener, Takahe, and JAAM. He has won awards including the first prize in the New Zealand Poetry Society International Poetry Competition.
He teaches creative writing in the School of English and Media Studies at Manawatu.
In 2008, he received a University early career research medal and in 2007 a Vice-Chancellor’s award for teaching excellence and a national tertiary teaching excellence award.
Resistance to Science in Contemporary American Poetry is out now. It can be purchased at Amazon.com and The Book Depository. A History of Glass can be pre-ordered at Amazon and The Book Depository.