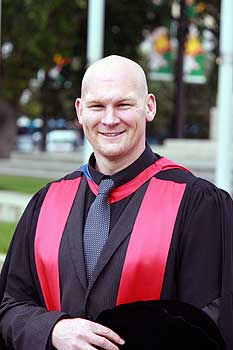 School of Sport and Exercise lecturer Dr Matt Barnes graduated with a PhD in Palmerston North last month. His research builds on work he did as an honours student that found alcohol inhibits recovery from injury.

He carried out several more studies to further investigate the link between alcohol and muscle recovery. In one study, participants carried out intense exercise that damaged a muscle. Participants then consumed alcohol, at a dose equivalent to seven standard drinks for an average male. On another occasion the same damage was done, however orange juice was consumed instead of alcohol.

The strength of the damaged muscle was then tested over the next three days for any loss in force. Dr Barnes says it was clear that drinking alcohol slowed recovery compared to orange juice.

“We found it is not the alcohol that is making a person weaker,” Dr Barnes says. “There is something going on between the alcohol and the damaged muscle. The alcohol interacts with the damaged tissue in some way.”

A second study halved the amount of alcohol consumed. “That lower dose had no effect on the force the participants could exert following muscle damage,” he says. “That indicates we need to do more work to find out if there is a threshold where alcohol becomes detrimental to recovery.”

A third study looked further at how the alcohol influenced recovery. Dr Barnes used electrical stimulation to contract the damaged leg muscle. “This bypasses the brain to make the muscle contract and tells us what is going on at the muscle without any influence from the brain. We used this technique in conjunction with voluntary activation of the muscle, and then compared the force produced by the two methods.”

He found the force the participants exerted voluntarily was reduced while the force generated by electrical stimulation was unchanged. “This suggests that when combined with damage to the muscle, alcohol brings about a decrease in central nervous system activity. You think you are pushing as hard as you can, but in fact you are not. Something is limiting the amount of force you are producing.”

This could be linked to an increased feeling of pain, but more research is required to prove this, he says.

Dr Barnes says the findings are the first to definitively show a causal link between alcohol consumption and recovery from muscle damage. “While injured athletes have been told to avoid alcohol for some time, we now have actual proof about why it is important to do so.”