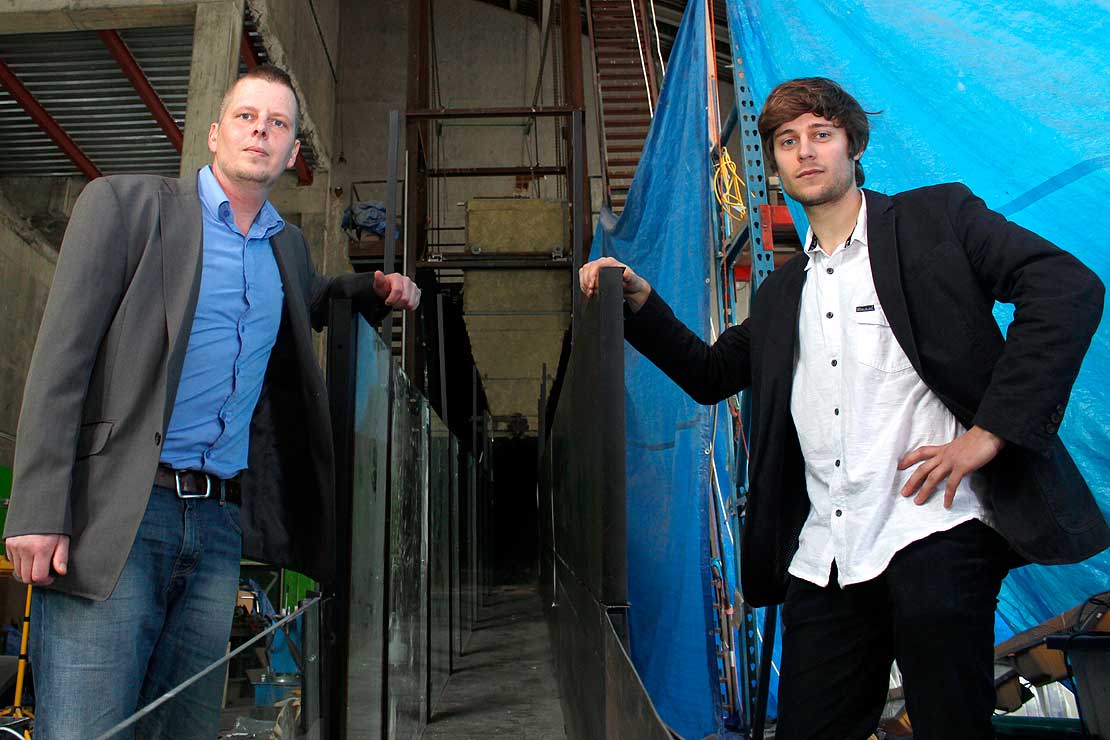 Dr Lube (left) and Dr Breard stand beside the eruption simulator on the Massey Manawatū campus.

Massey University researchers have made the first observations of the internal structure of volcanic flows, which are responsible for fifty per cent of volcanic fatalities and endanger half a billion people worldwide.

Co-authored by Dr Eric Breard and Dr Gert Lube from Massey’s Institute of Agriculture and Environment, the paper Coupling of turbulent and non-turbulent flow regimes within pyroclastic density currents has been published in Nature Geoscience.

Pyroclastic density currents (also called pyroclastic flows) are formed during volcanic eruptions and send avalanches of fast-moving clouds of hot ash, rock and gas down the flanks of volcanoes. For years, the inner workings of these flows have been a hotbed of debate between earth scientists, geophysicists, and applied mathematicians, each offering their own explanations of what may be occurring inside.

The infamous city of Pompeii is just one example in a long line of life-claiming incidents involving these flows and Dr Lube describes them as, “amongst the most destructive phenomena on Earth.

“Pyroclastic flows are the most common and lethal volcanic threat, and by analysing the internal structure we are laying the foundations to understand how they will behave in an eruption,” says Dr Lube.

The research sought to create a quantitative view inside the flows to define how the two separate transport regimes (non-turbulent underflow and fully turbulent ash cloud-regions) were able to harmonise and control the severity of the flow itself. However, measuring the inside of an avalanche of several tonnes of rock, gas and ash has proven impossible because of the heat and destructive force of the flows.

“We decided that if they could not see inside one of these flows, then maybe we could replicate one,” says Dr Lube.

This involved using Massey’s one-of-a-kind eruption simulator to synthesise the natural behaviour of the flows in unique large-scale experiments. The simulator works by dropping ash and pumice down a narrow channel while high-speed cameras and sensors capture the data.

Looking within the flows for how they behave.

Meeting in the middle

The results indicated that the currents met in a previously unrecognised turbulent middle zone, meaning there were not two currents but three.

“Inside this middle zone, the gas-particle mixture behaved fundamentally different from the turbulent suspension cloud above and the particle-rich avalanche of pumice below. Instead, the volcanic particle spontaneously associated in a pattern of dendritic particle clusters called mesoscale clusters.

“This opens a new path towards reliable predictions of their motion, and will be particularly topical for hazard scientists and decision makers, because they will lead to major revisions of volcanic hazard forecasts and ultimately more effective measures for keeping people safe,” says Dr Lube.

“This research replaces the existing theories and long-standing paradigms that have underpinned how we understand and ultimately protect people against the flows.”The research represents a cross-campus and international collaboration effort that is funded through the Royal Society Marsden Fund and the Natural Hazards Research Platform. Massey University Professor Jim Jones and Dr Anja Moebis are contributing co-authors of the paper. Massey researchers also received support from scientists from the University of Auckland, Georgia Institute of Technology in Atlanta and the State University of New York.