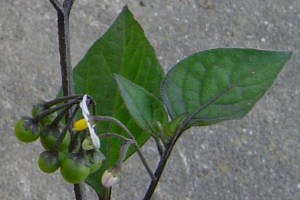 Black nightshade is a tall, upright plant, usually much branched so it can occupy quite a bit of space within crops or gardens. The foliage, and especially the stems, can get quite a purplish tinge, which is more noticeable late in the season when stressed by cool conditions. The main distinguishing feature is the bunches of berries that form on mature plants. Berries are usually either green or black. Black nightshade also has flowers which are usually white with yellow anthers and stamens in the centre.  Although black nightshade is the most common of the nightshade species in New Zealand, there are a number of other nightshade species, with one of the more common of these being velvety nightshade (Solanum chenopodioides), which gets its name due to having lots of short hairs on the foliage which make the leaves feel a bit like velvet when touched.  Black nightshade has almost no hairs on its leaves. Black nightshade is generally controlled by cultivation and most herbicides. However it is resistant to some groups of herbicides. It is resistant to some sulfonylurea herbicides, including chlorsulfuron (eg Glean) used in cereals and metsulfuron (eg Agpro Meturon, Eradicate 600) used for general weed control, so a second herbicide often needs to be applied to allow for this. It is not controlled by trifluralin so can be a problem in crops using this herbicide. Black nightshade often builds up in orchards, which can be due to resistance developing to triazine herbicides like simazine when they are used season after season, and it is also hard to kill with glyphosate once it grows up into lower branches of trees. Although the development of resistance by black nightshade to triazine herbicides was suspected for many years, in research at Massey University we confirmed that black nightshade taken from an arable cropping paddock in Manawatu was resistant to triazine herbicides used in peas and maize such as cyanazine, terbuthylazine and atrazine. The resistant plants tolerated over 30 times higher rates of herbicide than ordinary black nightshade. If this resistance does develop, the weed can still be controlled in peas using herbicides such as MCPB and bentazone. In maize, dicamba can be used to kill resistant plants.