Blackberry is a troublesome scrub weed in many parts of the country, both in pastures and forests. The hooks can trap woolly sheep, and make pruning and thinning in forests difficult. Seedlings are generally killed by grazing, so it does best in fence-lines, among logs and in other places where it gets some protection when young. There is considerable genetic variability in this species with respect to leaf shape and susceptibility to herbicides like glyphosate. The fruits are eaten by birds and seeds are dispersed in their dung, another reason why seedlings are often found along fence-lines below where birds once perched.  The fruits of course are very edible for humans as well, which is probably how the species arrived in New Zealand as the British pioneers brought their blackberry plants to New Zealand to plant in their gardens to make blackberry pies. 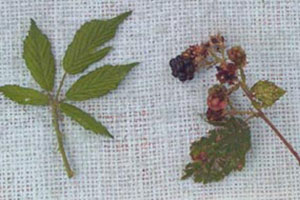 Blackberry has clambering canes with rearward facing spines, the same as sweet brier. Leaflets also have spines on the lower side of the mid-rib. Leaves generally have about five leaflets, which radiate out from a central point, unlike sweet brier leaves which have leaflets in opposite pairs. Flowers are white, and seeds are contained within characteristic red to black berries. Underground it has an extensive rhizome system, making it even harder to kill. Blackberry is one of the most favoured foods of goats, so a pasture system with some goats present tends to have less problems with blackberry. Even sheep and cattle will eat blackberry when it is a seedling, so having good grazing management can help prevent new plants getting established, though once the plants become woody, they are less likely to be eaten.  On dairy farms where blackberry establishes under electric fences and causes shorting of the electrical system, raising the bottom wire along fence-lines so that cows can graze under the fence increases the likelihood of seedlings being grazed out.  Herbicides that control blackberry include metsulfuron, triclopyr, picloram and glyphosate, but as mentioned above, some biotypes of blackberry are not very susceptible to glyphosate. Using triclopyr or a triclopyr/picloram mixture along fence-lines or for spot-spraying in pastures ensures that the grasses are not damaged so remain competitive against any further seedling establishment.  Here is a link to more information on the biology and control of blackberry.