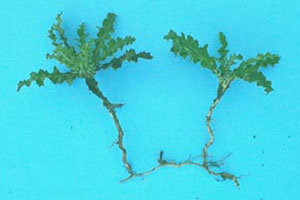 Californian thistle is one of the most common thistle species in New Zealand. It is very troublesome in pastures because it is so difficult to control. Once a plant has established in pasture, it forms a patch of plants which are initially connected by the creeping root system, but these connections rot away in time. These patches of thistles eventually get larger over time if conditions are suitable for its growth. Every winter, the foliage dies off, but the creeping root system is still alive underground. New plants re-establish from these roots in spring, and flowering occurs in summer and autumn. It is unwanted in pasture because livestock do not like grazing too close to the spiny foliage, so pasture plants beside thistle plants don’t get eaten. In crops, Californian thistle can be very competitive, establishing quickly in a new crop from old root systems. Californian thistle is also well-adapted to growing in situations such as asparagus crops and in orchards where residual herbicides are used. Residual herbicides remain active in the soil for several months, killing weed seeds as they germinate. As the creeping root system of Californian thistle is deeper in the soil than the residual herbicide, the plant is unaffected. 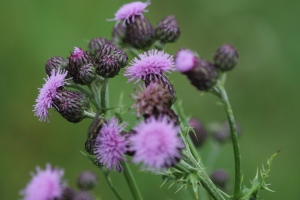 No other thistle species in New Zealand is a perennial. The other species are either annuals or biennials, all with tap-roots. Only Californian thistle has horizontally growing creeping root systems joining plants together. The tendency to grow in patches is another distinguishing feature. The flower heads are smaller than many other thistle species such as Scotch thistle and nodding thistle, though similar in size to winged thistle.  Scotch thistle usually has small spines on the tops of leaves, unlike Californian thistle.  Both winged thistle and nodding thistle often have faint whitish patterns on their leaves in the rosette stage. In pasture, the most effective way of controlling Californian thistle is to apply glyphosate (using a 5% solution of Glyphosate 360, or 500 ml to 10 L water) to the weed foliage using a rotary weed wiper (Rotowiper). As suggested by its name, this is a towed, rotating roll of carpet held above the pasture by wheels, which wipes the translocated herbicide on to the thistle but not the pasture. It is best applied in late summer or early autumn when most sugar movement is down to the root system in preparation for winter. However, the plants need to be actively growing. As we found in recent research, if they are stressed due to drought or aphid attack, poor control will occur. Another wiping device, the C-Dax Eliminator, will also work well. Clopyralid and metsulfuron are other herbicides that can be wiped on, though our research has shown these can cause more damage to pasture following rainfall than glyphosate.

Constant mowing can also be an effective way to kill Californian thistle. Because of its upright growth habit, constant removal of the foliage eventually depletes the root reserves. However, the mowing does need to be constant if it is to be effective. The optimum timing for mowing is when Californian thistle has just reached the flower bud stage, but flower buds have not yet opened. At this stage, many sugars have been used from the root system to help the stems develop, and after this stage, sugars are being actively sent back down to the roots to replenish reserves. Applying MCPB rather than mowing can also be effective at this growth stage, but all this does is removes the foliage as would occur with mowing. So it needs to be done continually each time the plant reaches this growth stage. Thus farmers may like to use mowing at some of the times this growth stage is reached, and apply MCPB at times when mowing is not so suitable. Wiping herbicides such as glyphosate is not thought to work well at early flowering because the herbicide is wiped only on the top part of stems, and at early flowering, most sugar movement from upper leaves is into flowers, not down into roots, which occurs better in late summer. 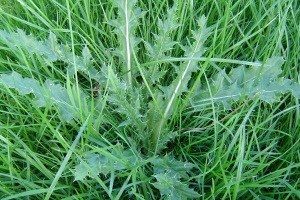 In crops, application of appropriate translocated herbicides by more conventional spray equipment is usually effective if sugars are moving downwards in the plant at the time. Clopyralid is a particularly useful herbicide for this. If spraying out pastures in spring ready to plant a crop, glyphosate usually gives poor control of Californian thistle as it is only just beginning to emerge for the season from its underground root system, so sugar movement is going the wrong way to give good control of roots.   So it may be better to boom-spray a pasture to be used for spring cropping back in the previous autumn with clopyralid when sugars are moving down into the roots.  This will also kill all clovers in the pasture, but if the paddock is about to be cropped in the following spring, this might be acceptable.  If establishing crops or new pastures in autumn, glyphosate application will usually give much better control at this time.

Once established plants have been killed in pastures, new plants have difficulty re-establishing from seed because seedlings are very susceptible to competition. New plants usually establish when new pastures are sown, as competition from pasture plants is low then. Applying MCPB is an effective way of selectively removing young seedlings before they establish creeping roots. Grazing goats can be another way of tackling Californian thistle, as goats will eat this weed, unlike most other livestock. Find out more information about the biology and control of Californian thistle.