Chickweed is a reasonably small annual weed. It can germinate and grow at any time of the year, and commonly germinates in autumn and grows through winter, thus acting as a winter annual. It is very commonly found in gardens, especially in winter and spring. Chickweed can also grow in crops, and is occasionally found in lawns in shady places, such as under trees. It appears to be particularly tolerant of shade. Another situation where chickweed can be found is in pastures, especially pastures that have not been grazed for some time through autumn to provide feed for stock in winter ("autumn-saved" pastures). Livestock don't particularly like eating chickweed. 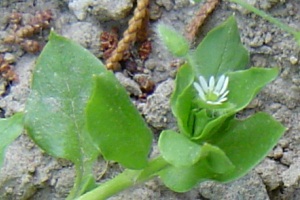 Chickweed scrambles along the ground in much the same way as scrambling speedwell, though it can also grow up and over surrounding plants too. The leaves have a distinct tip to them (see middle picture). Although there are no hairs on the leaves of chickweed, there are hairs on the stalks of the leaves and flower buds, and there is also a single line of hairs along the stems (see bottom picture). When it is flowering, there are clusters of small white flowers at the ends of the stems. A similar weed is annual mouse-ear chickweed, which has little white flowers like this, but the leaves and stems are much hairier. 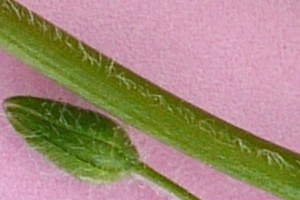