Cleavers is an annual weed which is often found in its vegetative stage over winter, and produces fruits in mid to late spring. It is often considered to be sticky because it clings tenaciously to socks, other clothing and to sheep. However, the foliage and fruits are actually armed with tiny hooks which help them "stick" to such surfaces in a similar way to the hooks used with Velcro. Cats and dogs are particularly good at spreading the fruits in urban areas.  It is a clambering weed with long weak stems that climb up over surrounding plants and structures such as fences, so the hooks also help keep the plant in place. In some situation within crops, cleavers can cause lodging of the crop, which is where the weed climbs up over the top of crop plants such as wheat, then makes them "top-heavy" and thus fall flat to the ground during windy weather. This can make harvesting of the crop more difficult, and is most likely to happen in cereal crops planted in autumn, though it tends to cause more problems in UK cereal crops than New Zealand. Apart from growing in some arable crops, it is often found in gardens and waste places.  It germinates in gardens under shrubs in quite shady environments then grows up through and over the shrubs. 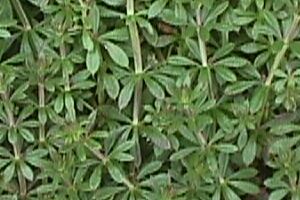 The clustering of the leaves around the stem as shown in the top picture makes this weed quite distinctive, as do the tiny hooks which help it cling to your socks as mentioned above. The fruits are small double spheres about 5 mm across, each half containing a seed. The hooks on these structures help them get dispersed by passing animals and humans. Probably the only weeds that this species might be confused with are field madder (Sherardia arvensis) and several bedstraw species such as slender bedstraw (Galium divaricatum), which all tend to be smaller in size than cleavers. 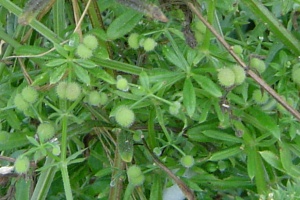 In gardens and waste places, cleavers are easily destroyed by cultivation or simply pulling the plants out because of the brittle stems and shallow root systems. When selecting a herbicide to control cleavers within a crop, some care is required as a number of herbicides give very poor control of this weed, partly because of a fairly thick waxy cuticle to the leaves.  In cereals, MCPA and 2,4-D do not give good control of cleavers.  Herbicides that are known to give reasonable control of cleavers include mecoprop, diflufenican, fluroxypyr, bromoxynil and chlorsulfuron, though most of these need to be applied while the plants are small.