Couch (pronounced "kooch") is one of the most troublesome rhizomatous weeds in flower gardens and crops, competing for light, nutrients and water, and generally looking unsightly in gardens. It was formerly known as Agropyron repens and Elymus repens, and in some countries is called quackgrass. Although most perennial weeds do not tolerate constant disturbance by cultivation, couch is one of the best perennial weeds at regrowing rapidly following disturbance and building up food reserves in the rhizomes again, ready for the next disturbance. Although it is found throughout the year, it tends to be less active over winter.  It often grows unnoticed in ryegrass pastures because the leaves and flower stems look much the same as ryegrass.  But when the paddock is cultivated to grow a crop, it is suddenly very noticeable as it regrows rapidly from the uncontrolled rhizome system to compete strongly with newly sown crop seedlings. 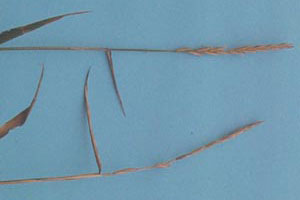 As couch is a grass, it can be very difficult to differentiate from other grass species when it doesn't have a seed-head. It can be separated from many grass species of course by the presence of rhizomes underground, a characteristic not shared by many grass species. The rhizomes tend to have quite pointed ends. However, there is a tendency by some farmers to call any grass species "couch" that has a rhizome system, and species such as Indian doab, Mercer grass and browntop are all called couch in some parts of the country. Probably the best way of differentiating couch from most of these species is that it has no runners above ground, whereas Indian doab, Mercer grass and browntop all have stolon growth (ie creeping rooted stems) above ground in addition to rhizomes underground. When a seed-head is present, it is only likely to be confused with ryegrass, which usually has no rhizomes or only very short ones. Where the leaf blade of couch joins the sheath, there are two small pointed flaps of tissue called auricles. Many other grass species do not have auricles, though ryegrass does. 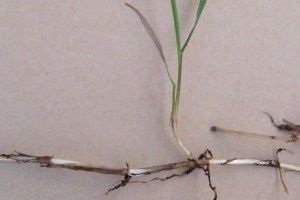 If mulches are laid on gardens without first killing all couch rhizomes, the couch will grow up through the mulch. As mentioned above, couch is well-adapted to survive cultivation on a reasonably regular basis. Glyphosate is the best translocated herbicide to kill it, though it must be applied after each plant has produced 3-4 leaves, or else sugars may be moving out of the rhizome to help establishment of the shoot, resulting in poor movement of the glyphosate to the rhizomes. Applying glyphosate to pastures containing couch in early spring may not control it well if it is still semi-dormant from winter or only getting reestablished again after dying back.  Selective grass herbicides such as haloxyfop can also give good control of couch, and will do this without harming nearby broad-leaved crop species, though obviously this cannot be used in grass crops such as cereals or ryegrass.