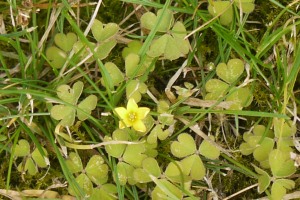 Creeping oxalis is a small perennial weed which grows from stolons (creeping stems) and is typically found in lawns. Unlike many oxalis species such as pink shamrock (Oxalis vallicola), it doesn’t have underground bulbils, though the stolon system is still an efficient form of vegetative reproduction for this species. It allows creeping oxalis to spread out through turf to form quite dense mats at times. It is helped by its tolerance of many of the commonly used selective turf herbicides. It has little yellow flowers which help make the plant obvious at those times of the year when it is flowering. Creeping oxalis is native to New Zealand and appears to tolerate a wide range of growing conditions. It is typically found in fairly dry, low fertility, open swards, but does seem to tolerate poor drainage OK and can also thrive under quite high fertility conditions. As can be seen in the pictures on this page, creeping oxalis has trifoliate leaves (ie each leaf has three leaflets), and each leaflet has a distinct notch out of the end of it. It is typically much smaller than any of the other oxalis species found in New Zealand, and is one of the best adapted oxalis species for surviving constant defoliation within turf. The flowers are fairly simple in structure with petals radiating out from a central point, unlike the yellow flowers of suckling clover which are sometimes confused with creeping oxalis but which have the typical legume-shaped florets. Suckling clover only flowers in spring then dies off over summer, unlike creeping oxalis. Another yellow-flowered oxalis species sometimes found in turf is Bermuda buttercup (Oxalis pes-caprae), which flowers mainly in winter and becomes dormant over summer. Bermuda buttercup tends to have larger leaves than creeping oxalis and no creeping stolon system - it has bulbils underground. The weed which is hardest to tell apart from creeping oxalis is horned oxalis (Oxalis corniculata), which looks just like a larger version of creeping oxalis. It has leaves, stolons and flowers all much the same as creeping oxalis, just larger. Size can vary considerably with any weed species depending on growing conditions. But creeping oxalis leaves are typically less than 10 mm across, while horned oxalis leaves are normally about 20 mm across, or sometimes more. Horned oxalis is typically found in flower gardens and nurseries rather than lawns. Apart from differences in size, it seems that the best way to tell them apart is flower number. Creeping oxalis usually has solitary flowers (ie grow by themselves, and very occasionally in pairs) whereas horned oxalis usually has clusters of at least two flowers, often up to 5 flowers. 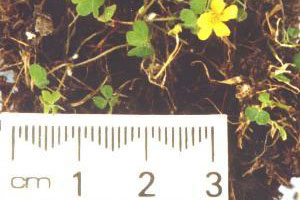 As mentioned above, creeping oxalis can tolerate many of the herbicides used in turf. MCPA is ineffective, and so is clopyralid. There tends to be regrowth following use of 2,4-D, and the addition of dicamba doesn't always give 100% kill. A mixture of mecoprop, ioxynil and bromoxynil (eg Image) appears to check this weed, but regrowth from the stolon system generally soon occurs. The most effective herbicide for controlling creeping oxalis appears to be triclopyr. This is sold by itself under a number of trade names, including Grazon, Brushoff, Eliminate, Victory or in garden centres as Hydrocotyle Killer. It is also sold in combination with picloram to control a wider range of turf weeds (eg Victory Gold).