Groundsel is a small, upright annual weed. Because of its size, it tends not to be as competitive as some annual weeds found in cropping, though high densities of groundsel can be competitive in young crops. However, the ability of groundsel to complete its life cycle very quickly (often seeding within 5 to 6 weeks of germinating) makes it very successful in flower gardens, where weeds must complete their life cycle quickly before the garden is weeded again. Seeds are blown around in the wind because of the pappus attached to the seeds. Thus groundsel is often one of the first weeds to cause problems in sterilised soil in nurseries by blowing on to this soil. Also they often colonise on the top of mulches in gardens following wide dispersal. Groundsel can germinate and flower at any time of the year.  This is also a weed that is capable of continuing to develop and mature its seeds after the plant has been pulled out and is dying. 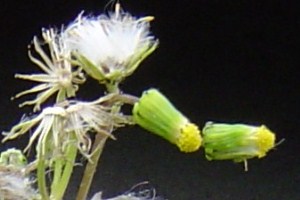 Groundsel is usually only about 20-40 cm tall, or smaller. It has quite fleshy leaves and stems. When mature, it has green flower heads which contain a number of yellow florets. The flower heads usually only open once the seed is ripe, releasing many seeds each attached to a "fluffy" pappus, which allow the seeds to be blown in the wind. Groundsel often has a rust fungus attacking it, and is also host to the black hairy caterpillars of the magpie moth. Possibly the one weed it might be confused with is gravel groundsel though this tends to sprawl across the ground more than groundsel and has yellow flowers that open up, unlike groundsel which simply releases pappus when its flower-heads open. 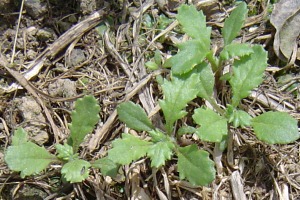 Groundsel is generally easily controlled, though is resistant to some herbicides used in cropping such as trifluralin, oryzalin, pendimethalin and bromacil.  Having just a shallow, fibrous root system, it is easily removed from gardens by pulling it out or using a hoe, but the ability of the species to set seed quickly means that if you miss it when tidying up the garden, it will probably have set seed by the time you come back to weed the garden again.  Covering a garden in mulch will stop seed germinating from in the soil, but seed can soon blow on top of the mulch and these first few plants that establish on top of the mulch need to be killed before they set seed and establish a seed bank on top of the mulch.  Around nurseries, plants need to be prevented from setting seed around the container plants or else seed will end up in the planter bags of sterile potting mix to cause problems.