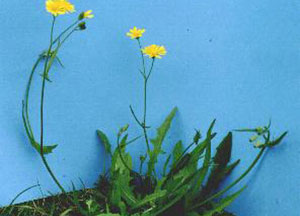 Hawksbeard is often confused with a number of other weed species which look similar to it. In the vegetative phase, it is very difficult to tell apart from dandelion. Once it is flowering it also looks quite similar to weeds such as catsear, hawkbit and sow thistle. Unlike dandelion, catsear and hawkbit, hawksbeard is an annual weed, or may survive into a second season to become a biennial. As a result, it is found in slightly different habitats. The other perennial "flatweeds" just mentioned are usually found in turf and pastures, whereas hawksbeard is more likely to be found in crops and gardens. However it can also cause problems in young turf or newly sown pastures. Being an annual, it needs bare soil to establish each year, whereas perennial weeds like dandelion only need to establish once then can continue living in turf or pastures for many years. Hawksbeard starts life as a flat rosette which can easily survive mowing, unlike sow thistle which tends to have a more upright rosette. It can be differentiated from catsear and hawkbit as these two both have bristly hairy leaves, whereas hawksbeard and dandelion have reasonably hairless leaves. The lobes of dandelion leaves tend to point down towards the base of the leaf, whereas hawksbeard lobes point directly outwards. Once the weeds flower, they become easier to tell apart. Hawksbeard has branched, leafy flower stems, unlike dandelion, catsear and hawkbit. Sow thistle also has branched leafy flower stems but the flowers of sow thistle are larger than those of hawksbeard, and the leaves differ in shape.

Being an annual weed, hawksbeard tends to be more susceptible to herbicides than perennial look-alikes such as dandelion. In young turf, herbicides such as clopyralid (eg Versatill) and MCPA should control it successfully. In gardens, it is susceptible to glyphosate, reasonably susceptible to glufosinate but tends to regrow from paraquat applications. Cultivation should work OK, but it does have a tap-root from which older plants can re-establish. Many selective herbicides can be used to control it in crops, though some herbicides give poor control, such as bentazone (eg Basagran), flumetsulam (eg Preside), metribuzin or trifluralin.