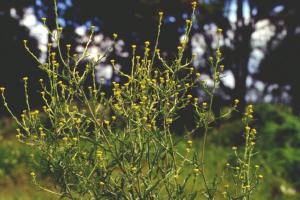 Hedge mustard is an annual weed which can germinate at any time, though normally it germinates either in spring or autumn. It grows as a rosette initially then forms upright flowering stems that can grow up to 1 metre or more in height. It is normally a weed of crops, though is also found in waste places and sometimes in pastures. In some parts of the country, it incorrectly gets called wireweed, which is a completely different weed species. Apart from problems with competition, hedge mustard can also be a concern in crops such as peas because its tough stem material can clog up harvesters.  It is evidently used in Europe in cooking, either in salads or cooked as a pot herb.  Herbalists use it to soothe sore throats and sort out bronchitis and stomach ailments, not that we are advocating here for you to do this. In the rosette stage, hedge mustard can be confused with many of the other Brassicaceae and Asteraceae weeds which start as rosettes, though it does have quite pronounced lobes. Plants with look-alike rosettes include sow thistle, Cape weed, wild turnip, wild radish and twin cress.  But once it forms its flower stems, there shouldn't be too much confusion. It has small yellow flowers on the tips of the tall, upright flower stems, and these flowers are smaller than those found in wild turnip. It can also be differentiated from wild turnip and other similar weeds by having pods that grow parallel to the flower stem and so not being very obvious, rather than sticking out as in wild turnip. 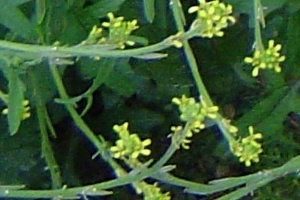 Being a member of the brassica family, it is very difficult to remove selectively from brassica crops such as turnips and cabbages because it is too closely related to the crops and is therefore resistant to the same herbicides as the crops. This has been partly overcome by introduction of the Cleancrop Brassica System which uses brassica cultivars bred to tolerate the herbicide chlorsulfuron (Telar) which will control hedge mustard. In other situations, it is fairly easily controlled. For example, in pastures herbicides such as MCPB, MCPA, 2,4-D and flumetsulam (eg Preside) can be used. Most herbicides used in cereals are effective, though not clopyralid (eg Versatill). For peas, herbicides such as cyanazine (Bladex) and terbuthylazine (eg Terbaflo) will be effective, though not trifluralin (eg Treflan). In pastures, farmers should try to keep pastures dense to prevent new seedlings establishing.