Ivy is a very common plant in gardens.  It can be used as a ground cover, but usually is grown as a vine-like creeper up walls and fences.  Many older buildings around the world have ivy up the walls, which was once considered quaint but now often it gets removed because it can cause problems to the buildings through the roots penetrating cracks or joints in walls, and also by becoming too large due to the vigour of its growth.  It is considered a weed because it often becomes too aggressive within gardens, and also it makes its way into blocks of native bush where it causes havoc by growing up trees and smothering them with their leaves.  They can make the trees top-heavy and so branches may be brought down in the wind.  It covers the ground due to its tolerance of shade, preventing establishment of tree seedlings.  It spreads due to birds eating the berries, and also due to people dumping their garden waste in rural areas.  Some regional councils now restrict the sale and distribution of the species.  Ivy can cause dermatitis if you handle the foliage due to chemicals it produces. Ivy is an ever-green vine that can grow up trees and walls over 30 m tall.  When it grows as large as this, it has large woody trunks at the base.  The stems allow the ivy to grow up vertical walls by producing sucker-like structures that allow it to hold very tightly to surfaces, making it very difficult to remove.  The leaves can differ in shape.  Many of the leaves are quite broad, often with three to five lobes and light-coloured veins.  Younger leaves can be a lighter green colour than older leaves.  On some parts of the vine that are quite mature, often the leaves will be much narrower in shape, and that change of morphology can just be seen in the top right corner of the upper photo.  The flowers produced in autumn are fairly insignificant yellowish-green structures, which form dark purple to black berries in clusters during later winter (see lower photo). The two weeds most likely to be confused with ivy are probably German ivy (Delairea odorata, formerly Senecio mikanoides) and Cape ivy (Senecio angulatus).  Both tend to be more fleshy and succulent than ivy, and at certain times of the year when they are flowering are easy to differentiate from ivy as they have bright, conspicuous yellow flowers similar to the flowers of ragwort to which they are quite closely related. 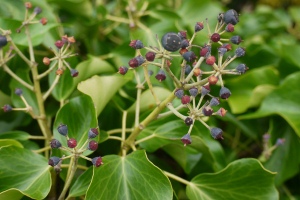 As ivy can grow up and over desirable trees, care is needed when treating ivy that the vegetation underneath is not going to be damaged also.  If ivy is simply growing across the ground and over fences or buildings with no desirable vegetation underneath, then spraying of the ivy is probably the best way to kill it, though it is tolerant of most herbicides due to the waxy nature of its leaves.  Various sources of information differ in their opinions on herbicides to use.  Some suggest glyphosate, others suggest glyphosate will only suppress ivy, and another suggests using a glyphosate/metsulfuron mixture, but all agree that it must be used with a penetrant such as Pulse.  Other sources suggest just metsulfuron by itself (with penetrant), or a triclopyr/picloram mixture.  Where the ivy is growing over another plant, it is best to find where the ivy has its woody stem entering the soil, then cut this and treat the stump with a herbicide such as a fairly concentrated mix of metsulfuron plus water, or triclopyr/picloram plus diesel, or a gel formulation of picloram or glyphosate.  If the stump being treated is close to the root zone of a desirable tree, applying a glyphosate gel to cut stumps is probably the safest of these options as picloram is very persistent and is likely to be taken up by the roots of the desirable tree.  Click here to read about the experiences of one organisation trying to control ivy which found that either damaging small areas of ivy with a line-trimmer or larger areas with sheep grazing prior to applying metsulfuron gives improved results, followed by hand-pulling of bits that survive.