Parsley dropwort is most commonly called "carrot-weed" in New Zealand, though this name can lead to confusion with wild carrot (Daucus carota) which is another species. Parsley dropwort is an invasive pasture weed which causes major problems where it grows. However, at present, it grows mainly only in Northland, and is only present at a few other scattered locations within New Zealand though is becoming more common in Auckland, Coromandel and Waikato. Parsley dropwort is a perennial weed, and it is troublesome because it is not readily eaten by animals due to chemicals present within the leaves. It becomes particularly unpalatable when it forms woody upright flower stalks in late spring. In Northland, it can become quite dominant within pastures once it is flowering, and the tubers that grow on its roots make it hard to control successfully. It lowers the quality of hay made from infested paddocks, and this hay is probably a major vector for spreading the weed to new properties if hay is sold to other farmers. Parsley dropwort also grows in waste areas and road-sides, and even in lawns where the stumps of mown woody stalks can be painful if stood on with bare feet. 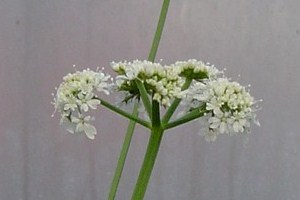 The two weeds that parsley dropwort are most likely to be confused with are hemlock and wild carrot, both also weeds from the Apiaceae family. All three of these weeds have white flowers in the form of umbels on top of upright flower stems. The best way to tell them all apart is to closely study the leaves. The leaf shape of parsley dropwort is shown in the side picture. It is made up of leaf segments quite different in shape to hemlock, which is quite fern-like in shape, and also different to wild carrot which has leaves almost exactly the same as the cultivated carrot, which have much finer leaf segments. It is sometimes also confused with yarrow, but this also has very fine leaf segments. Parsley dropwort has little swollen tubers on its roots, though these often aren't very noticeable. These tubers allow the plant to regrow again following control attempts. A number of cropping farmers in Canterbury have recently reported having parsley dropwort in their crops, but this weed actually appears to be beaked parsley (Anthriscus caucalis), which is an annual weed.  Beaked parsley does not have tubers underground, and the developing fruits have a distinctive appearance. There is very little information available on control of parsley dropwort. We have conducted one small trial in Northland looking at its control, and some information has also been gleaned from chemical company reps. It appears the best way to tackle parsley dropwort is to boom-spray paddocks with a fairly high rate of 2,4-D ester (eg at least 3 L/ha of Pasture-Kleen) in August before the Northland Regional Council restrictions on spraying this herbicide in September. We have found applications in June work quite well too. If you have a paddock with lots of buttercup as well as parsley dropwort, then MCPA seems to kill parsley dropwort nearly as well as 2,4-D. In waste areas, glyphosate and metsulfuron appear to do a reasonable job of controlling it. Clopyralid (eg Versatill) at reasonably high rates also appears effective on parsley dropwort, so this might be useful in turf or for spot-spraying scattered plants in pasture (though 2,4-D might be fine for spot-spraying too). As the plant can get taller than pasture in late spring, wiper-applicators might work with herbicides such as glyphosate, metsulfuron or clopyralid, but I'm not aware of any experiments with this. As there is so little information on controlling this weed, please email Kerry Harrington if you know of other treatments that work well.  One person has told me that they have found a 2,4-D/dicamba mix works well for spot-spraying.  Another person has said results with 2,4-D are not so good if applied once the plant has formed flower-heads.