Paspalum is a grass weed which has very short stout rhizomes, which join plants together to form dense clumps. This weed is mainly a problem in turf, as it forms unsightly clumps in lawns which are difficult to remove selectively. The seed-heads are formed on tough stems, which generally do not get cut by reel mowers. As paspalum is such a large grass, it also grows successfully in waste areas. It can cause problems in orchards too, as it is fairly resistant of many of the herbicides used under fruit trees. In pastures, it can be debated whether paspalum is good or bad, as it does provide feed during dry summers, but it can result in poor animal production over winter because it out-competes perennial ryegrass in summer, then when it grows poorly through winter, there is less ryegrass available to give winter production.  As paspalum needs warm conditions due to being a C4 species, it is mainly only a problem in the North Island, and this is also why it is generally not very active in winter. In lawns, paspalum is one of the broadest leafed grasses likely to be found. As the shoots tend to grow quite flat to the soil surface under a mowing regime, they are able to survive constant mowing to a low cutting height. Leaves can sometimes have a purple tinge, especially along the margins. At the base of the leaf blade (where it joins the sheath), there is a membranous ligule which has a tuft of hairs either side of it (see lower photo). Otherwise, the leaf blade has few hairs on it. The flower-head tends to be quite characteristic (see photo on the left) and is unlikely to be confused with many other grass seed heads, except perhaps Vasey grass, which has about 10-25 "fingers" per seed-head, compared with about 4-7 in paspalum. Other grasses with "fingers" in the seed-heads usually have the fingers all radiating out from one point, such as summer grass and Indian doab, rather than spread down the top part of the stem as in paspalum. 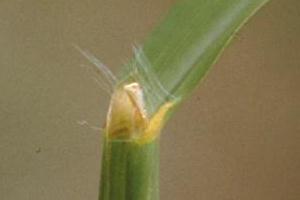 Glyphosate gives good control of paspalum if a sufficiently high concentration is used. However, this is not suitable for selective control in turf as it kills the lawn grass as well. A specialist herbicide called MSMA was once used by commercial green-keepers, though the toxicity of this chemical and the importance to apply correct rates of MSMA made it unsuitable for home-gardeners to use, and it is now not available to commercial users either due to being based on arsenic.  So now it is a matter of using glyphosate whenever paspalum control is required.  With pastures, this means spraying out the pasture with a reasonable rate of glyphosate then resowing with perennial ryegrass and clover in autumn.  Likewise in turf the best option is to spot-spray patches in late summer or early autumn then resow dead patches a few weeks later after raking out the dead rhizome material.