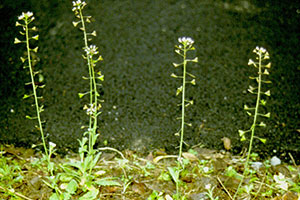 Shepherd's purse is a fairly small annual weed which can germinate at most times of the year and is very commonly found in crops and gardens throughout New Zealand. It is often found in winter because of its ability to grow throughout the year, and so it can grow readily at times of the year when more competitive summer annuals are absent. It is usually present at other times of the year too, but just might not be quite as noticeable.  Shepherd’s purse can complete its life cycle quickly, so can undergo several generations within one year.  It has long-lived seed, lasting in the soil several decades under some conditions, so this coupled with the rapid life cycle means there can be quite a build-up of seed in the soil. 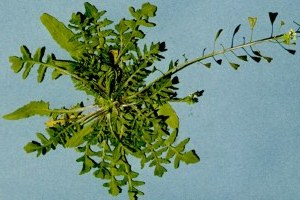 It starts as a rosette, with very variable leaf shapes which can make it difficult to identify at times while vegetative. For example, it could be easily confused with the rosette of hawksbeard, though the leaf shape is slightly different.  Likewise a Cape weed rosette looks similar, though Cape weed usually has a larger rosette and is whitish under the leaf.  However, shepherd’s purse often soon puts up a flower stem with small white flowers, then forms lots of its characteristic heart-shaped seed pods, which are evidently similar in shape to the purses that shepherds carried around back in ancient history, hence the name. Although the rosettes seldom get much bigger than 10-15 cm diameter, the stems can often get up to 20-30 cm tall if growing conditions are good. Another weed that looks a bit like shepherd's purse is bitter cress, though the leaf shape is slightly different, it doesn't tend to get as big as shepherd's purse and the pods that form are not as wide. 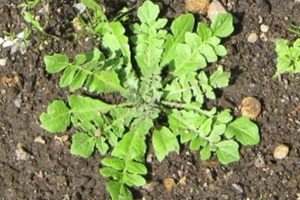 It tolerates quite a few different herbicides, being quite resistant to many selective herbicides such as dicamba, clopyralid, picloram and trifluralin, making it very difficult to control in forage brassicas. However, the herbicide clomazone (sold in products such as Director CS and Ombre Encaps) will control it in brassica crops if applied at pre-emergence.  It is well controlled by MCPA and 2,4-D, and most crops other than the brassicas have a number of herbicides that can be used to control it. Non-selective herbicides such as glyphosate and amitrole easily kill it, as does cultivation.