Staggerweed is a reasonably small annual weed which tends to scramble across the ground rather than grow upright. It gets its name because animals which eat too much of it can develop a health problem known as staggers, which causes them to stagger around. I heard of a case recently where staggerweed in a brassica crop caused some sheep to drown after staggering into a creek beside the paddock.  It is normally found in gardens and crops rather than in pastures as it needs bare soil to get established because of it being an annual. Although some annual weeds only establish in spring, staggerweed will germinate at any time of the year, particularly in spring and autumn. 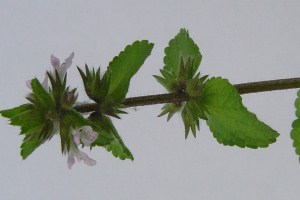 Staggerweed can be easily confused with red dead-nettle (Lamium purpureum) and henbit (Lamium amplexicaule), which are also both small cropping weeds from the Lamiaceae family. All three have lilac flowers clustered at the base of leaves, and also have square stems. However, staggerweed has a much hairier stem than the other two, and the leaves of staggerweed near the ends of the stems are more likely to have no stalks than red dead-nettle. There are also subtle differences in leaf shape between the three species.  There is also a perennial weed closely related to staggerweed that used to be called hedge stachys but is now hedge woundwort (Stachys sylvatica) which typically grows in shady waste areas, has underground rhizomes and quite a strong smell when leaves are crushed, though it is mainly only found in the lower half of the North Island. The resistance of staggerweed to a number of commonly used selective cropping herbicides can make it more of a problem than would normally be expected of a small annual weed like this. For example, in cereals it tolerates herbicides such as chlorsulfuron (eg Glean), tribenuron (eg Granstar), MCPA, 2,4-D and partially by clopyralid (eg Versatill). It is best controlled in cereal crops as young seedlings using bromoxynil (eg Bromotril, or in Jaguar or Image) or suppressed by using Hussar (iodosulfuron).  In other crops, trifluralin can control it, clopyralid can give reasonable knockdown of it when applied early enough, atrazine and simazine kill it, and it is also controlled by non-selective herbicides such as glufosinate and glyphosate.