Tradescantia is more correctly known as wandering Jew in New Zealand, but as this name is considered offensive to some people, it has been decided to call it tradescantia on this site.  Some in New Zealand have decided to call it wandering willie, though many organisations within this country have now moved to the name of tradescantia to get away from the offensive nature of the official name. Tradescantia is a succulent perennial plant that is an environmental weed, causing major problems under trees and in bush reserves throughout the North Island in some parts of the South Island. Originally from South America, it has been grown as an ornamental garden plant for many years and also in hanging pots, but sale in garden centres is now banned because of its invasive nature. Because tradescantia can form thick mats of vegetation in moist, shady areas within bush reserves, it stops new seedlings of trees and shrubs from establishing wherever it grows. Although it is not thought to produce seeds within New Zealand, it spreads due to the brittle nature of its stems, resulting in the plant fragmenting easily, and these fragments do not dry out easily. It probably spreads mainly during periods of flooding, when it gets washed into new areas. It also gets into new areas through people dumping garden waste on roadsides, as it is commonly found in many gardens, especially where gardens have been growing for many decades. Apart from being a major problem within bush areas and shady gardens, it can cause allergic skin reactions in dogs and other animals running through the foliage. It is also exceedingly difficult to get rid of once established. 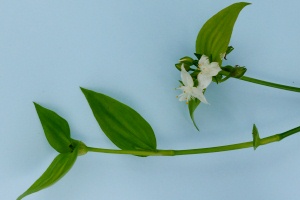 The succulent, brittle nature of the stems distinguishes it from a number of other species that grow in shady forest floors such as periwinkle (Vinca major) and ivy (Hedera helix). Each leaf is oval shaped, shiny, smooth and slightly fleshy with pointed tips. When growing in a mat, this can get 50 cm deep at times. It produces white flowers about 2 cm across in spring to early summer, with each having three petals, whereas periwinkle has blue flowers. 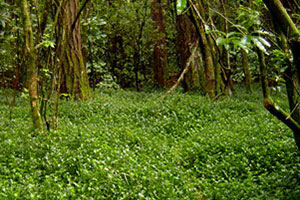 Most herbicides give very poor control. The best chemical appears to be triclopyr, which is sold under such trade names as Grazon, Eliminate, Scrubcutter and in garden centres as Hydrocotyle Killer. Even with this herbicide, re-treatment may be necessary. Amitrole has been used in the past, and although this works better than glyphosate, it is not as effective as triclopyr. Likewise, metsulfuron has some activity on it, but is a less effective herbicide. However, triclopyr is mainly used for controlling scrub weeds, so be careful not to spray it on nearby shrubs. Some people have attempted to rake the plant up under hot dry conditions rather than use herbicide, but this seldom works as any fragments left behind will regenerate, and the raked material has to be disposed of carefully so it doesn’t spread to new areas. Picloram gel (eg Vigilant) has sometimes been applied to it with a paint roller, but this cannot be recommended as the persistent picloram residues can be taken up by the roots of trees and shrubs growing underneath the treated weed and cause severe damage to these trees and shrubs.