Wireweed is closely related to willow weed, and is also a summer annual, but is able to establish even earlier in spring than willow weed and most other summer annuals. It tends to establish in quite wet soils, and is often found in crops established early in spring when the soil is wetter than is ideal for crop establishment. It is also commonly found in gateways and along paths where it can establish in the bare soil caused by treading. Once established, it is very tolerant of treading. In turf, it can establish in sports grounds where grass has been damaged by winter sport, such as goal mouths. 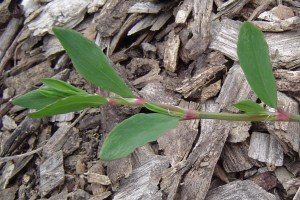 The leaves of wireweed are generally quite small. However wireweed can be very variable. In some situations, such as beside footpaths, the bulk of the plant is a prostrate stem with a few small leaves attached. In other situations, especially within crops under good growing conditions, it can grow upright and be very leafy. Some of this variability is due to the environmental conditions under which it develops, but there is also genetic variability, in fact enough to form a different species, in that there is a very closely related species called small-leaved wireweed (Polygonum arenastrum). These two species have at times been considered one species, but taxonomists now feel they should be separated out in that small-flowered wireweed is consistently smaller in leaf (with leaf size quite consistent between branches and lower main stems) and with much more leafy stems. As with willow weed, there is a papery sheath around the base of each leaf in both wireweed species. Unlike willow weed though, flowers are only found at the base of leaves, not clustered at the ends of stems. As a result of their small size and being hidden away at the base of leaves, they are quite inconspicuous. 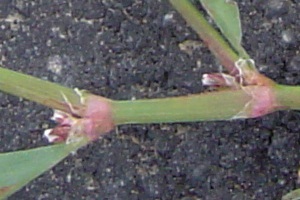 Although most selective herbicides are capable of controlling wireweed within crops, many of them have warnings on their labels that application should be made to wireweed at the seedling stage to ensure good control.  Once it gets older, it becomes more tolerant of many products such as MCPA, 2,4-D amine and chlorsulfuron.