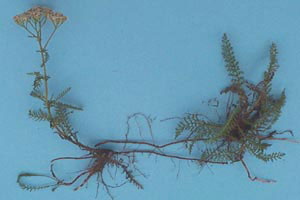 Yarrow is commonly found in pastures throughout New Zealand, though it is not really a weed ("unwanted plant") in pastures. It was once sown as a pasture species because of its ability to tolerate dry summer conditions with its deep rhizome system, and also because it has higher quantities of some minerals than perennial ryegrass or white clover. It is still sold in New Zealand in pasture mixtures for organic farming systems. However, yarrow becomes a problem when a paddock is cultivated and a crop sown. The rhizome system allows the yarrow to survive cultivation, so the re-establishing plants cause major competition problems with crop plants. Likewise, yarrow is commonly found in turf. Once established in a lawn, yarrow is very tolerant of frequent mowing. However, it is unable to form seed-heads under constant mowing, so instead relies on vegetative spread by rhizomes to produce new plants. Yarrow is commonly found in waste areas and road-sides too, where the plants are better able to produce the characteristic white flower heads. 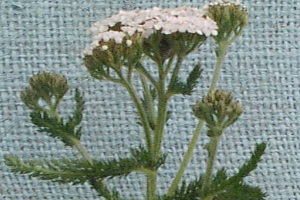 The finely-divided leaves of yarrow look similar to those of several other weed species. In turf, it can be confused with Onehunga weed, but yarrow has about 15-20 leaflets down each side of a leaf, compared with about 5-8 leaflets per side in Onehunga weed. In pastures, it might be confused with stinking mayweed, but it does not have the strong aroma when crushed that exists with stinking mayweed. Also, neither Onehunga weed nor stinking mayweed has a rhizome system underground like that found with yarrow. Vegetative plants of yarrow produce leaves from a growing point situated at ground level, making it tolerant of defoliation by animals or mowers. In situations where yarrow is able to flower, an upright stem forms and flower heads are produced which consist of many small white flowers which cluster together to create a conspicuous mass. 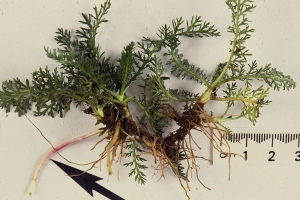 As with most perennial weeds with rhizomes and creeping roots, yarrow is much harder to kill than annual weeds. Cultivation cuts up the rhizome system, and regrowth occurs from each rhizome fragment which is not left on the soil surface. Rhizomes will dry out and die if left at the surface. Deep burial can also kill the rhizomes, but generally there are enough sugars stored in rhizome fragments to allow regrowth of foliage back to the soil surface if rhizomes are only buried at a shallow depth. Most herbicides give poor control because insufficient chemical moves into the rhizome system to kill it. Herbicides capable of translocating into the rhizome such as glyphosate, amitrole and clopyralid are required for good control.  In fact, even glyphosate does not give great control, so often tribenuron (eg Granstar) is recommended to be added to glyphosate plus a surfactant when spraying out pastures which have yarrow present to improve control.