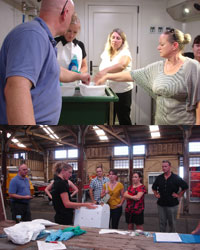 All aspects of a wildlife response were covered, including: setting up a wildlife facility; field search and capture techniques; triage; aspects of washing oiled birds; wildlife rehabilitation and release; and aspects relating to the administrative, logistical and financial requirements in an emergency response. Practical training workshops included demonstration of field response gear, set-up of equipment trailers and practice of the feather wash and rinse process.

An oil spill exercise presented a scenario where five tonnes of oil had leaked from a pipeline at sea and washed up on several nearby islands. The teams then played out how they would respond to such a disaster, allowed essential logistical factors to be considered. For instance, prior to collection of any oiled wildlife, the responders need to organise: where to set up the facility; how to access to fresh water; and how to transport live oiled animals to the facility.

The short course was very well received, with positive feedback from participants. The training has paved the way for future collaboration with other international oiled wildlife responders.