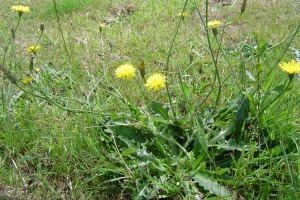 Catsear is often confused with dandelion, and certainly has many similarities to both it and hawkbit. All three are perennial weeds with rosettes in the vegetative phase, and upright flower stems with yellow flowers and wind-blown pappus attached to the seeds. These species are often known as "flat-weeds." They are commonly found in turf and pastures. Although catsear is an eye-sore in lawns, reasons for killing it in sheep or dairy pastures are often less clear because it causes no harm to sheep or cows. Most animals like eating catsear, and it can continue growing successfully during dry conditions because of its deep tap-root. However, when a pasture has lots of catsear and other flat-weed species, this usually indicates that there is a low density of grass and clover plants, and so the pasture does not produce much feed for livestock. In other words, it is "run-down" and needs to 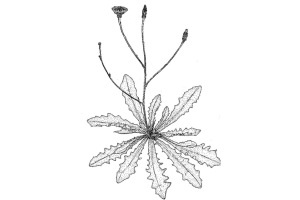 be resown or oversown to increase its productivity. If catsear is dominating in turf or pasture, it often also suggests that nutrient levels in the soil are low, as catsear is more tolerant of low fertility than many grass species. Note though that in pastures grazed by horses, there may be good reason for wanting to remove this weed. It has been associated with a health problem known as Australian stringhalt. Nobody appears to be sure how catsear causes this condition, or even if it does, but it may be due to fungal toxins associated with the weed, though recent research has suggested it only causes problems when plants are under stress, which would mean it involves a secondary substance produced by the weed. In the vegetative phase, catsear can be differentiated from dandelion and hawksbeard because it has hairy leaves, unlike the other two. However, hawkbit also has hairy leaves, so telling vegetative catsear and hawkbit plants apart is more tricky. When comparing the relative length and width of hawkbit and catsear leaves, catsear leaves tends to be wider than hawkbit leaves. Once the plants begin flowering, they are easier to tell apart. Hawkbit and dandelion flower stems are unbranched, whereas they are branched in catsear and hawksbeard. Catsear flower stems are not leafy, whereas hawksbeard leaves always have some leaves up the stem. In pastures, it is very difficult to selectively remove catsear using herbicides without causing major damage to the clovers. As discussed above, you need to decide why you would want to selectively remove it anyway. If trying to improve a pasture dominated by catsear, it is best to spray out the whole pasture with glyphosate then resow it. In turf, because clovers don’t need preserving, a wider range of herbicides are available. However, the tap-root of catsear makes it less susceptible to some of the products that could be used. A triclopyr/picloram mixture (eg Victory Gold) or a 2,4-D/dicamba mixture should control it successfully. If using clopyralid (eg Versatill), a fairly high application rate is required.  All of these herbicides will leave residues in lawn clippings if used for composting.  As clovers are often not considered that desirable in horse paddocks, these herbicides may also be options for people worried about Australian stringhalt.