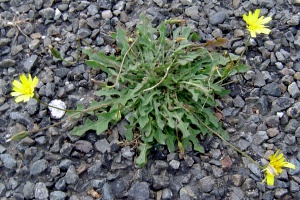 Hawkbit is a perennial weed often confused with dandelion and several other weed species which also have yellow flowers and look quite similar. Hawkbit grows in pastures and lawns, especially where the soil fertility is fairly low as it can tolerate these conditions well. It has a deep tap-root which allows it to continue growing actively during dry periods when grasses around it have browned off.  Because of the wind-blown seed, it can end up growing almost anywhere though, and you can see the plant in the top photo is growing quite well in a crack within asphalt. As with dandelion, catsear and hawksbeard, hawkbit grows as a rosette, with leaves radiating out from a growing point situated at ground level. This enables it to tolerate mowing and grazing. It has hairy leaves, unlike dandelion and hawksbeard. However, its leaves tend to be narrower than those of catsear. If you have a hand-lens or very good eye-sight, most hairs on hawkbit leaves have split ends, unlike in catsear. Once these weeds are flowering, hawkbit and dandelion have unbranched flower stems whereas hawksbeard and catsear stems are branched. Dandelion flower stems are more fleshy and hollow than the wiry flower stems of hawkbit. 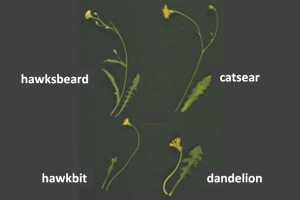 Hawkbit is very difficult to remove from pastures using selective herbicides. However, it doesn’t cause any harm to livestock, so probably isn’t worth killing. Stock will graze it, but don’t like it as much as catsear. If a pasture has lots of hawkbit present, it suggests the pasture is run-down and probably needs to be sprayed with glyphosate and resown. Applying fertiliser would probably also help make hawkbit less dominant. In turf, a range of herbicides are available to control hawkbit selectively, including clopyralid (eg Versatill), triclopyr/picloram (eg Victory Gold), and also the MCPA/mecoprop/dicamba mixtures commonly sold in garden centres for turf weed control. Hawkbit tends to be more susceptible to herbicides than catsear and dandelion.  Note that clopyralid and triclopyr/picloram leave residues in lawn clippings for many months after application so clippings must not be composted.