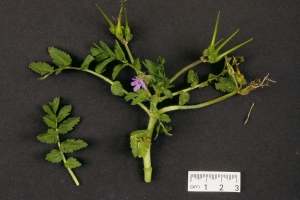 Musky storksbill can be a problem both in turf and pastures. In turf, it forms large, unsightly rosettes. As they can be seen from quite some distance away, most green-keepers with any pride will be keen to get rid of them. Although appearance is the main issue in turf, the sharp seed-heads can be a problem if the weed is growing in sheep pastures. The sharply pointed fruits can pierce the skins of animals and make their way into the flesh. However, this occurs much less frequently than with barley grass, or the closely related storksbill (Erodium cicutarium). There have been claims that animals eating the foliage of musky storksbill can get poisoned, becoming sensitive to light. However, this doesn't appear to be a common problem, and there seems to be some dispute about whether it occurs at all. Musky storksbill can be an annual or biennial weed species. It needs bare soil to get established, whether this be in turf that has opened up due to drought damage or some other disruption, or in pasture from dryness, over-grazing, insect damage, etc. Musky storksbill can sometimes also be a problem in crops. 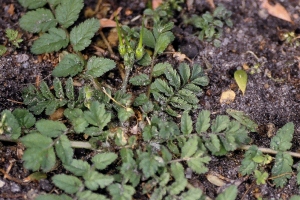 Musky storksbill starts life as a rosette, with each leaf made up of a series of leaflets, and these leaves radiate out from a central growing point located at ground level. As mentioned above, these leaves can get quite long under suitable conditions, resulting in large rosettes. When the plant flowers, it forms prostrate stems which have small purple/pink flowers 1.0 - 1.5 cm in diameter, which later produce distinctive seed-heads which look a bit like the head of a stork, hence its name. The fruits that come out of these have a long, spirally-twisted awn connected to them which can wind and unwind depending on the humidity, allowing burial of the seed into the soil. Storksbill (Erodium cicutarium) looks very similar to musky storksbill, but tends to be found more in drier, less fertile sites than musky storksbill. The image below shows part of a leaf from each species, indicating how the leaflets in storksbill are more finely divided than those in storksbill. 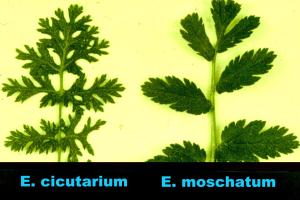 Both storksbill species are not very susceptible to 2,4-D, though MCPA will give some control of young plants, and 2,4-D ester can do a reasonable job on young plants as well. In turf, a picloram/triclopyr mixture (eg Victory Gold) will give good control. Likewise a 2,4-D/dicamba mixture should give a reasonable level of control. Clopyralid will not control them, while Image (mecoprop + ioxynil + bromoxynil) tends only to check their growth. Bentazone (eg Basagran, or in Pulsar) is a herbicide that can be used selectively both in turf and pasture for controlling these weeds, though only on young plants. In broad-leaved crops such as lucerne or brassica crops, it can be selectively removed using haloxyfop (eg Gallant Ultra).