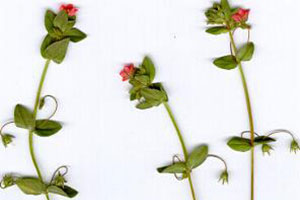 Scarlet pimpernel is a relatively small, scrambling annual weed similar in size and growth habit to weeds such as scrambling speedwell and chickweed. It can germinate and grow at any time of the year, and is commonly found in flower gardens and crops. Because of its size, it is probably never particularly competitive with crops, though it can cause problems if densities are high enough.  It is one of the more common contaminants in white clover seed crops.  It contains a few toxins which have occasionally caused poisoning problems.  In some parts of the world it has the alternate names of poorman’s barometer and shepherd’s weather glass as evidently the flowers close when atmospheric pressure decreases and bad weather is approaching. 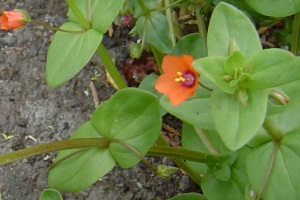 Scarlet pimpernel has prostrate stems that clamber across the ground and can grow up over surrounding objects and plants. It has a square, hairless stem, with occasional branches that are perpendicular to the stems and in opposite pairs. Leaves have no stalks (known as "sessile" leaves) and grow in opposite pairs. On the underneath of the leaves, there are often small black glands present, which look like dots. The flowers are not really scarlet as suggested by the name, but more an orange or orange-red colour. There is a variant of the species which has blue flowers.  Once it has finished flowering, the plant has round seed capsules, as shown in the lower photo.  A similar weed is chickweed, which has white flowers, round stems and a single line of hairs down the side of each stem. Staggerweed also looks similar, but it has hairy, square stems and lilac flowers in the axils of leaves.  Red dead-nettle has square stems with no hairs but the leaf shape is quite different with stalks. This weed is relatively easy to control, being susceptible to cultivation and most herbicides. Within turf, it can grow quite low to the ground and thus avoid being mown.  A few herbicides are ineffective against it, especially clopyralid (eg Versatill).