Twin cress (formerly Coronopus didymus) is an annual weed which can germinate at any time of the year, though typically it establishes mainly in spring and autumn. As a seedling, it is a rosette rather than a scrambling plant. Although a fairly small and inconspicuous weed, it can cause major problems on dairy farms if it is eaten by lactating cows, as the milk from these cows will then develop a distinctive taint, which is not wanted by processing companies buying the milk. If companies detect the taint, they will often refuse to accept any more milk from the farmer concerned until a strategy has been devised to prevent further milk tainting from occurring. This weed is also known incorrectly by some farmers as land cress. Although it can cause problems on dairy farms, it is more typically found in crops and gardens, wherever there is bare soil to allow seedling establishment. 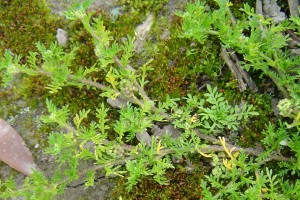 As mentioned above, twin cress begins life as a prostrate rosette, with its growing point remaining at ground level and leaves radiating out from this point. Each leaf is composed of a number of leaflets, and each leaflet has a number of lobes. A distinctive characteristic of twin cress is that there tend to be more lobes on one side of a leaflet than the other, ie the leaflets are not symmetrical, unlike most other weeds. As twin cress becomes more mature, it sends out prostrate stems, which can form quite extensive mats on the ground if left long enough, looking similar to wireweed from a distance. Twin cress has very small, insignificant flowers, then produces characteristic double pods (hence the name twin cress) which are small but are very useful for confirming whether a weed is twin cress. The foliage also has a distinctive aroma when crushed.  A similar species is the closely related wart cress (Lepidium squamatum,  formerly Coronopus squamatus), but the pods on this species look like warts rather than twin pods. In young pastures, where twin cress is most often found on dairy farms, MCPB can be used to control it selectively, but only while the weed is young. Once it gets a bit larger, MCPA will be needed, and this will retard the growth of clovers for several months. Once it is more advanced, even MCPA does not give reliable control, so it is best to treat it while it is young. Another option for controlling twin cress if sprayed before the 4-leaf stage is flumetsulam (eg Preside).  Twin cress cannot establish in pastures that are dense, which is why it is seldom found in older pastures. Watch for signs of twin cress developing in new pastures, open parts of paddocks, such as around water troughs, gateways or wherever else bare soil might have been exposed. It is tolerant of mowing in young lawns, but can be controlled by a number of selective turf herbicides, though not bentazone. In crops and flower gardens, it is susceptible to cultivation and most herbicides, though not trifluralin, simazine and several other commonly used chemicals.