For World Wildlife Conservation Day, we wanted to highlight the important work our Wildbase Hospital does in providing veterinary and scientific services to a number of conservation programmes around Aotearoa New Zealand.

Wildlife conservation has never been more crucial as we see the alarming decrease in species populations worldwide. The purpose of Wildlife Conservation Day is to acknowledge the current situation and take action regarding the issues threatening the biodiversity balance of wildlife.

New Zealand has one of the highest proportions of native species sitting within the threatened category in the world, making conservation management imperative to prevent extinction.

Wildbase Hospital, located on our Manawatū campus in Palmerston North, is well-known for providing medical and surgical treatment to rare and endangered native birds, reptiles and bats across the motu. On average, Wildbase sees around 400 patients each year, of which approximately half are considered threatened or endangered species.

The four services Wildbase offer – veterinary, pathology, research and husbandry advice, all contribute significantly to the conservation of New Zealand’s rarest species. Below are a few of the programmes Wildbase supports that focus on at-risk native manu (bird, any winged creature).

With only 250 shore plovers, or tūturuatu, found in the wild across a few offshore islands around the mainland, the Department of Conservation-led Shore Plover Recovery Programme has been established to tackle their threatened status.

Wildbase Hospital is operating at the centre of this programme, researching and performing on-the-ground management to help discover more about these rare birds. In all four areas of their service, Wildbase is contributing to the conservation efforts of the shore plover.

When injured or sick shore plover enter the hospital, the team undertake a range of diagnostic tests to determine if they can be returned to the wild or would be best suited to enter the captive breeding programme. Post-mortem, or examining a dead body to determine cause of death, falls under their pathology services, which can provide plenty of detail around issues that might be affecting the population. Wildbase’s research output supported by the university allows the team to build upon the veterinary and pathology services to explore issues affecting the shore plover. The team also provide husbandry advice that can make huge changes to the health and wellbeing of shore plover in captivity.

Wildbase Veterinarian Professor Brett Gartrell has been an integral part of the work taking place within the programme. A key focus of his work has been to develop ways for shore plover to gain immunity from avian pox virus while in captivity. The virus is spread by mosquitoes and while captive-breeding facilities have insect-proof aviaries to protect the young birds from the virus, it leaves them vulnerable when they’re ready to be released.

Dr Gartrell says his favourite thing about shore plover are their fabulous characters.

“They don’t know they’re endangered so they act like complete idiots and get themselves into all sorts of trouble! The planet would be poorer for their absence.”

Another programme the Wildbase team are involved with is Operation Nest Egg. With only a small percentage of kiwi chicks reaching adulthood when hatched in the wild, the nationwide recovery programme is an important tool for increasing the kiwi population.

In this programme, kiwi chicks are hatched and raised in captivity until they’re ready to fend for themselves in the wild, which increases their chances of surviving to adulthood by 65 per cent.

There are several Operation Nest Egg facilities, including the National Kiwi Hatchery, that have a close relationship with the Wildbase Hospital team, who can assist with medical care for the juvenile kiwi. Kiwi chicks as young as a few days old can be admitted for treatment and are cared for by the staff until they are healthy enough to return to captive rearing facilities.

In one case, a kiwi chick was rushed to Wildbase for urgent care during the hatching process as complications prevented it from occurring naturally. After a successful procedure and follow up care, the kiwi chick recovered well and was able to be released into the care of Pūkaha National Wildlife Centre.

Kākāpō sit well within the critically endangered category, with a population of only 252. The Kākāpō Recovery is a combined effort between scientists, rangers, volunteers, donors and wildlife organisations, including our Wildbase team, who work to protect the dwindling population.

A cause of concern is the aspergillosis outbreaks that have occurred during recent breeding seasons, which is an infection that can cause severe and often fatal respiratory illness. Aspergillosis is challenging to diagnose early and difficult to treat, so the Wildbase team work tirelessly to provide medical care and diagnostic support to fight against the disease. In 2019, Wildbase saw 15 kākāpō through the programme, which made up seven per cent of the total population.

To celebrate World Wildlife Conservation Day, we wanted to share the mahi a member of our Massey whānau has done to encourage the younger generation to get interested in conservation and our lesser-known endangered wildlife. 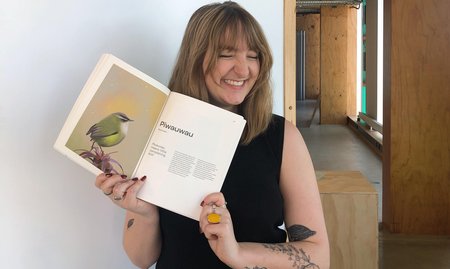 Kiwi saved during hatching at Wildbase

A kiwi chick has been saved by wildlife experts at Massey University and Pūkaha National Wildlife Centre after complications during hatching. 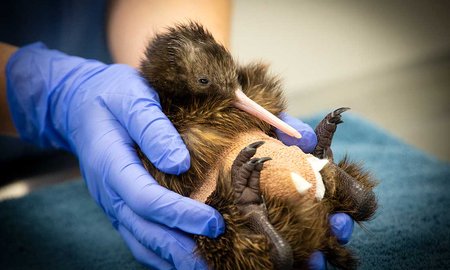 A young kākāpō chick has undergone life-saving brain surgery at Massey University's Wildbase Hospital to treat a developmental problem of the skull, a world-first procedure, adapting surgical techniques from humans and other mammals. 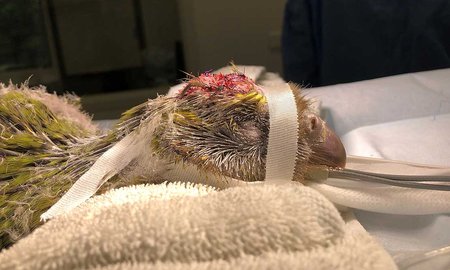