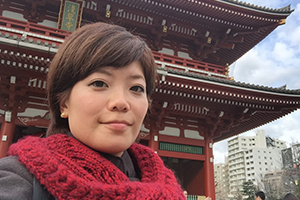 FROM JAPAN
Master of Science majoring in Physics

"Physics always struck me as the most interesting of the sciences and the majority of scientists who I really look up to are all physicists.

I met some really fun and interesting lecturers at Massey and thought if I was going to pay for my education, I should learn from people who are openly enthusiastic about their field. Studying at Massey was worthwhile as there was a lot of learning about things that are used in the real world. Science is not a textbook system with one answer for one question.

While there were papers I had to take to get a physics degree, I was also able to study music, literature and history. These papers made it clearer how scientific knowledge could be useful outside the laboratory.

As well as working at the University of Tokyo I'm a freelance science communicator and work with several universities and organisations in Japan and overseas. I have worked with some amazing leaders in science including Nobel laureates, and at one time my boss was an astronaut.

My physics background makes it easier for me to read papers from researchers at the Kavli IPMU. Taking other papers has also proved valuable because in my job I am constantly working with people with various backgrounds from different countries, and I wouldn't know how to talk to them or understand what they're talking about unless I studied more than just physics."